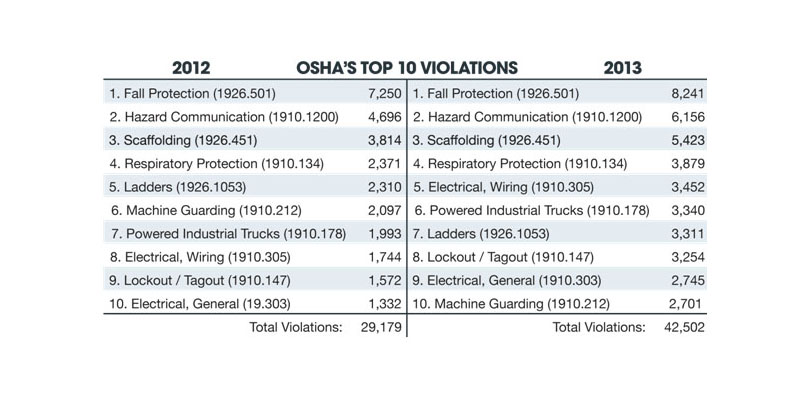 OSHA’s Top 10 cited violations are almost identical year after year.  As usual, the 2013 list didn’t change much from 2012.  In fact, the same 10 standards made up the top 10 in 2012, with the order being only slightly different.  In fact, the top 4 were exactly the same!

A quick comparison between the 2012 and 2013 numbers are as follows:

1. – Fall Protection – General Requirements (1926.501) – 8,739
Residential construction accounts for over half of these violations.  Other things to look for under this section includes: Unprotected sides and edges; Roofing work on low-slope roofs; and Unprotected holes.

2. – Hazard Communication (1910.1200) – 6,556
Not maintaining a written hazard communication program caused most of the citations in this section, followed by not training employees and not labeling chemical containers.

3. – Scaffolding (1926.451) – 5,724
Protection from falls to a lower level always make up the majority of citations under this section.  Planking or decking requirements and point of access for scaffold platforms are the next two reasons for citations.

4. – Respiratory Protection (1910.134) – 4,153
Medical evaluation general requirements and establishing and implementing written respirator protection program combined for over one fourth of the violations.  Improper selection of respirators and not performing employee fit testing both help keep this at number four.

5. – Electrical – Wiring methods (1910.305) – 3,709
Improper use of flexible cords and cables caused one third of the citations in this section. Conductors entering boxes, cabinets or fittings and Identification, splices and terminations also contributed to this citation count.

6. – Powered Industrial Trucks (1910.178) – 3,544
The top five reasons for these citations are: Safe operation not being utilized; Lack of refresher training and evaluation; No certification of trained and evaluated operators; Not taking truck out of service when repairs are necessary; and Not properly maintaining the industrial trucks.

7. – Ladders (1926.1053) – 3,524
Requirements for portable ladders used for accessing upper landing surfaces lead to the majority of these citations.  Other contributing factors include: Ladder use only for its design purpose; Not using the top or top step of stepladder as a step; Marking portable ladders with structural defects with tags noting them as defective; and  Employees shall not carry objects or loads that could cause them to lose balance and fall.

9. – Electrical – General Requirements (1910.303) – 2,932
Improper installation and use of equipment was the top citation generator in this section. Other things that helped this become number nine are inadequate space around electric equipment and inadequate services, feeders and branch circuits

10. – Machine Guarding (1910.212) – 2,852
The lack of guarding or using inadequate guards account for almost 2,500 of these citations. Not anchoring fixed machinery and having employees exposed to blades made up the balance of these citations.

OSHA’s special emphasis on these areas is clearly consistent year over year and enforcement is definitely on the rise.  Employers with a commitment to worker safety take a proactive approach to mitigating these hazards.  Getting help from EHS professionals who know what to look for when OSHA knocks is a great place to start.  If you haven’t considered a “Mock OSHA Audit” before, now may be the time.  Make sure you take steps now to avoid being part of 2014’s statistics!