Broken Bad: The Truth About Meth Labs from an Industrial Hygiene Perspective 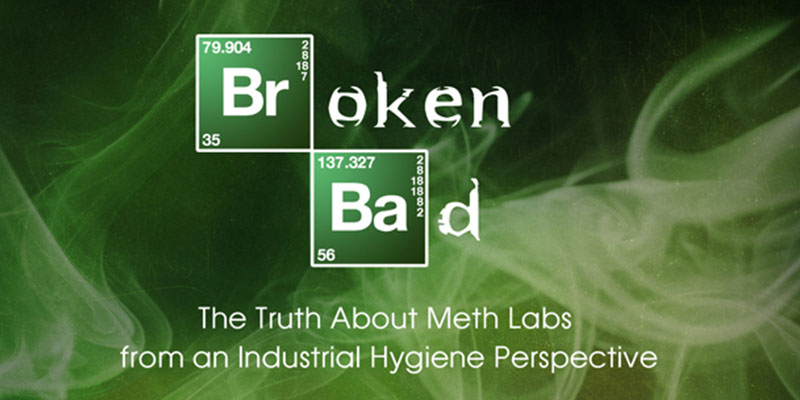 It is hard to watch the evening news without seeing a story regarding a “meth lab bust” or someone being arrested on a drug charge associated with methamphetamines.  The sad fact is that meth production is extremely common in the United States.  And while common, there is a misconception in what people imagine a meth lab to be. Due to television shows such as “Breaking Bad,” many think of a large, meth laboratory when that is actually not the norm.  Most meth labs produce the smaller, personal-use variety; otherwise known as a “Shake N Bake.”  Shake N Bake’s are comprised of small, 2-liter soda or Gatorade bottles. Hazardous chemicals are cooked in these small containers in bathrooms, trunks of cars….practically anywhere.

There are several hazardous chemicals associated with the production of methamphetamine, such as acetic anhydride, acetone, benzyl chloride, 2-butanone (methyl ethyl ketone), gramma-butyrolactone, hydrochloric acid, methyl isobutyl ketone, sulfuric acid, tetrachloroethylene and toluene.  During the manufacturing/cooking of meth, several off-gasses and byproducts are produced.  These include phospsine gas, red phosphorus and/or yellow phosphorus (when heated), hydrochloric acid, HCL gas, anhydrous ammonia, ether, iodine crystals, lye, methanol and muriatic acid.  These chemicals are deposited on surfaces inside the residence.   Without proper clean-up, these chemical residues may still remain and pose a significant health risk to the occupants.

Because of the potential risk to current and future tenants, many states have implemented testing and clearance requirements to clean these meth labs.

A landlord should be aware of any suspect activity that may be occurring inside the residence.  Some tell-tale indicators of meth production may be the presence of hand-held welding torches, glassware, aluminum foil and removal of light bulbs.  If a tenant is found conducting illegal activities inside the residence, the landlord is usually left holding the “proverbial bag.”

Remediation can be costly and time consuming.  During the clean-up, every surface inside the residence will need to be cleaned including floors, walls and ceilings.  The residue and fumes will also be drawn into the HVAC system and the exhaust fans associated with the bathroom and kitchen.  Plumbing may also be impacted from dumping the chemicals down the drain.  Typically the sink traps will need to be replaced as well.

Because of the potential risk to current and future tenants, many states have implemented testing and clearance requirements to clean these meth labs.  The Environmental Protection Agency (EPA) has produced guidance documents, however no regulation.  Based on guidance from EPA, several states including Colorado, Alaska, Arizona, Arkansas, Minnesota, Oregon, Tennessee and Washington have established clearance criteria for known Clandestine Laboratories (Meth Labs).  The clearance criteria in these states range from less than 0.005 micrograms per square centimeter (ug/100 cm2) to 0.5 ug/100 cm2 of methamphetamine residue remaining.

States that have seen an uptick in meth production have acted to address this growing health concern.  In Virginia, for example, a committee of remediation contractors, Health Department Officials and testing laboratories was formed and developed legislation to address Methamphetamine Laboratories in the Commonwealth. This legislation is currently pending, but if signed, it will go into effect July 1, 2014. The legislation, in a nutshell, requires that any Meth Lab must be disclosed to purchaser or tenant of that residence.  Such legislation would protect an unknowing individual from being exposed to hazardous chemicals that may adversely affect them.  The way to avoid disclosure, according to this pending legislature, is to have the residence tested by an independent third party – an Industrial Hygienist.  If tested by an industrial hygienist and the levels are found to be below 0.015 ug/100 cm2, disclosure is not required.

Due the pending regulation and dangers associated with methamphetamine production, the utilization of an experienced and qualified remediation contractor and industrial hygienist should be considered.  Knowing the relatively low clearance criteria, hopefully, this will shed some light on the extent and expenses related to the cleanup of a methamphetamine laboratory.