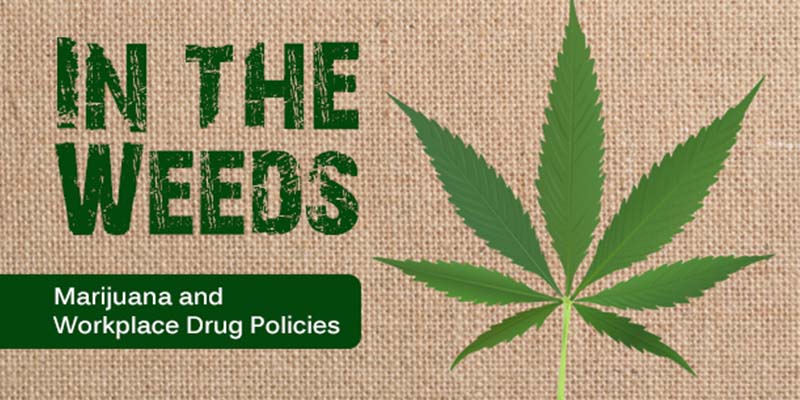 According to the Society for Human Resource Management (SHRM), a 2006 report indicates that 84 percent of private employers conduct pre-employment drug testing, 39 percent conduct random drug screening of employees, 73 percent conduct for-cause testing, and 58 percent require drug tests after on-the-job accidents.  Most employers test for some combination of illegal drugs, prescriptions drugs and alcohol.  Until recently, marijuana was in the category of illegal drugs in the United States and thus a non-debatable issue. It still is considered illegal under Federal law, which means marijuana must continue to be considered a prohibited substance in any workplace that receives Federal funding or is subject to Federal regulations.

However, twenty-three states and the District of Columbia have legalized medical marijuana. In the private sector, this allows individuals a defense against criminal charges of marijuana possession if he/she can prove a medical need under state law.  With the public perception of recreational marijuana use becoming more acceptable, even legalized in two states (Colorado and Washington), how does this affect employers’ drug testing policies?

Employers should base their policies with more emphasis placed on signs and symptoms of an employee’s impairment or fitness for duty in the workplace, rather than mere presence of a drug.

Disciplinary actions against employees who violate an employer’s drug policy have generally been based solely on either positive or negative results (presence or absence of a drug).  With marijuana becoming legal in more states, it is transitioning to the category of alcohol and prescription drugs and will need to be regarded as such.  This means employers should base their policies with more emphasis placed on signs and symptoms of an employee’s impairment or fitness for duty in the workplace, rather than mere presence of a drug.  By focusing on impairment, any argument against an employer for allowing workers who are hung over or high on prescription drugs, is decreased or negated.  A person who smoked pot 2 weeks ago could test positive and have no impairment at work, while a person who drank heavily the night before work could still be hung-over but test negative for alcohol.

If recreational marijuana is legalized in a particular state, employers can still prohibit its use while at work.

In reviewing drug policies, employers should know any recent changes in legalization or decriminalization of marijuana use in their state.  Employers should consult with their attorneys.  and have clear guidelines concerning the use of marijuana while openly communicating  expectations to their employees.  Supervisors and management should be trained on any changes in policy or state laws and be reminded of the confidentiality of employee health records and testing results.

There is some good news.  Drug free work place laws continue to be upheld in our courts.  and marijuana continues to be included in our nation’s Controlled Substance Act (CSA).  If recreational marijuana is legalized in a particular state, employers can still prohibit its use while at work.  Rather than feel overwhelmed and helpless with the new changes, employers may want to increase their workplace drug testing instead of backing off.  There will continue to be challenges and problematic issues surrounding workplace drug screening and legalization of marijuana, but employers continue to have the right to provide drug free workplaces.

For more informatiom, the American Association of Occupational Health Nurses (AAOHN) is hosting an upcoming webinar, entitled Medical and Recreational Marijuana in the Workplace, on Wednesday, February 18, 2015, from
12:00 – 1:00 PM (EST).