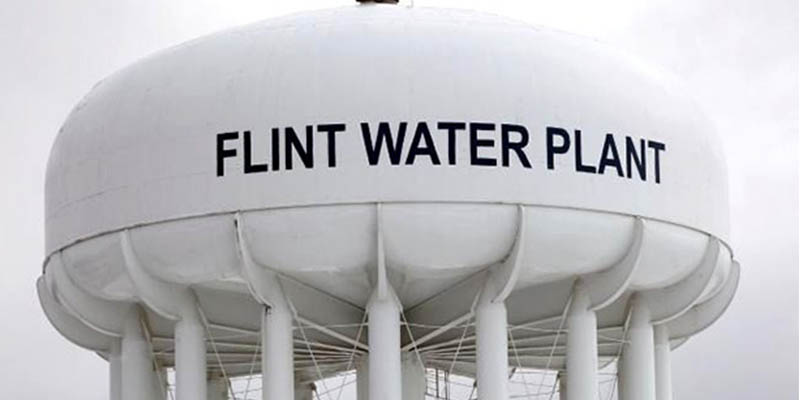 The first in a two part blog on the water crisis that has evolved over the last year in Flint, Michigan. The second part of the story will deal with the science behind water quality in Flint.

The city of Flint, Michigan is a quiet, working class, mostly African American, city of approximately 100,000 residents, located about 50 miles northwest of Detroit. The city’s residents and leaders have found themselves embroiled in a health crisis of huge proportions, that has seemingly spiraled out of control over the last year, reaching the highest levels of the Federal government. The issue began when the city, already in receivership made the decision to stop taking water from the Detroit system (clean water pumped from the depths of Lake Huron) to join a new water district. Unfortunately, the piping infrastructure for the new system was not built yet. Rather than come up with a stopgap plan to continue to receive water from Detroit, one of Governor Rick Snyder’s appointed emergency managers for the city authorized a plan to pump water directly from the Flint River, at a savings of about $1 million per year.

Lead is known to be a potent neurological toxin, affecting the central nervous system.

Press reports (Reuters, 1/21/16) indicated that the river is known locally as a dumping ground, contaminated with runoff from agricultural operations, sewage and industrial effluent. In fact, one of the few remaining GM manufacturing plants in town refused to utilize the water because it was so corrosive, and brokered their own deal to continue to use Lake Huron water! (Rolling Stone 1/22/2016). Flint officials attempted to add lime to the water to soften it, but that only made it more corrosive.
So where did the lead come from? It was not actually in the river water (although there may well have been some there), but the corrosive properties of the water caused lead to leach from aging piping in the city’s system. It also inhibits the effect of chlorine, the primary disinfectant used to inhibit biological growth in the water.

Problems began within a month of the change, with complaints from residents about the color of the water and that it was making them sick. Lead is known to be a potent neurological toxin, affecting the central nervous system. Children are much more susceptible to the effects of lead. Symptoms include impaired cognitive function and shortened attention spans. The more lead contaminated water consumed by pregnant women, the higher likelihood of cognitive damage in their children. The neurological effects of lead poisoning are believed to be irreversible, and can be devastating.

Dr. Mona Hanna-Attisha, a respected local pediatrician who has been gathering data on childhood blood lead levels both before and after the crisis, found that levels in children had on average doubled since the transition, and even tripled in several zip codes. Her data placed her hospital, city-owned Hurley Medical Center, squarely in the crosshairs of this political hot potato (USA Today Oct. 11, 2015). She continued to speak out, even as local authorities dismissed her research and labeled her comments “unfortunate.”

An EPA water expert, Dr. Miguel Del Toral, began studying the issue in February 2015, and issued an internal memo highlighting the dangers in June of 2015. As explained by Susan Hedman, EPA Region 5 Regional Administrator, his report was not released as the EPA sought legal opinion regarding their authority to act on this issue. To their credit, the EPA did urge the Michigan Department of Environmental Quality (MDEQ)to act to solve the crisis. Dr. Del Toral’s report was finally released in November as the crisis continued to grow.

The lid began to come off the Flint crisis through the efforts of Virginia Tech professor Dr. Marc Edwards, a civil engineer and expert on water treatment and corrosion. A concerned citizen, noticing problems in her own family, contacted Edwards, and he brought a team of twenty five researchers to Flint to conduct water sampling. The team found serious lead contamination in the city’s water. Like Dr. Hanna-Attisha, Dr. Edwards conclusions were dismissed by local and state officials and his credibility attacked.

Meanwhile, as voices grew, City residents were urged not to drink the water. Citizens, activists and celebrities from coast to coast came out of the woodwork to decry the crisis and help out however they could. Cher donated 180,000 bottles of water and Pearl Jam donated $300,000 from concert funds.

As late as July, the state advised residents “not to worry.” The MDEQ spokesperson was quoted as saying “It does not look like there is a broad problem with the water supply freeing up lead as it goes to homes.” Meanwhile Dr. Edwards and Dr. Hanna-Attisha were finding otherwise. In addition, the Michigan Department of Health and Human Services released a report January 21, indicating that there has been an increase in cases of Legionnaire’s disease (a form of pulmonary disease caused by bacteria in water) in the county that includes Flint. The agency found 87 Legionnaire’s cases and nine deaths from June 2014 through October 2015.

Finally the voices grew too loud.

But the crisis has not ended. Lead levels remain high in the city’s water system. The Michigan public health officials recommend that every child under the age of six, somewhere close to 9,000 children, be identified as lead exposed. These children will need to be treated and tracked for years, even decades, to determine the true costs of this misadventure.

Calls continue for the resignation of Governor Snyder, and class action lawsuits are in the works. No one knows or can predict if Flint’s water system will be “safe” again. Could this crisis have been avoided? Hard to tell. Maybe with better analysis and planning on the front end. But it certainly could have been managed better. This highlights the downside of avoiding or downplaying serious or troubling issues when they arise, only to have them surface again in an out of control spiral. Thousands of children, and many more residents of Flint will pay a high and lasting price for the ignored warnings, doubt, or as some believe, criminal neglect, of officials charged with protecting the health and safety of the public.

The second part of the story will deal with the science behind water quality in Flint.