Understanding the Requirements for Emergency Eyewashes and Showers 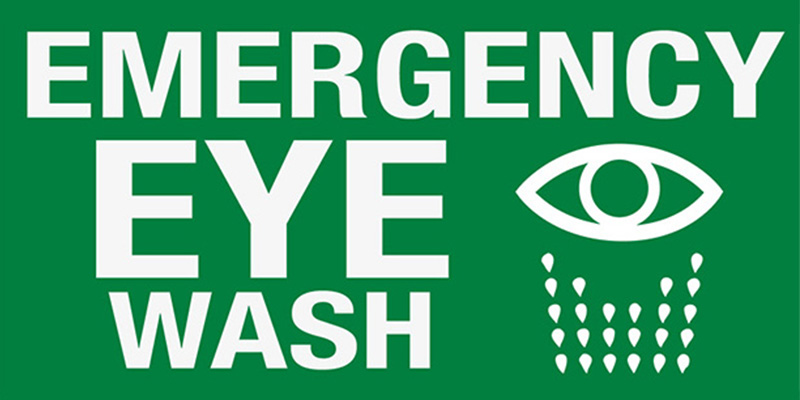 1910.151(c) Where the eyes or body of any person may be exposed to injurious corrosive materials, suitable facilities for quick drenching or flushing of the eyes and body shall be provided within the work area for immediate emergency use.

Often misunderstood, this is the OSHA standard on emergency eyewash and shower units. On the surface, the standard doesn’t seem to tell us a great deal, so let’s break it down for a clearer understanding. For specific details, the owners of emergency eyewash and shower units should follow the consensus standard ANSI Z358.1 to be OSHA compliant. Although this is a consensus standard and cannot cited by OSHA, it is used as a guide during compliance inspections.

“Where the eyes or body of any person may be exposed to injurious corrosive materials…”
The first statement requires flushing devices (eyes and body) only when employees have exposure to injurious corrosive materials such as strong acids, sodium hypochlorite, etc. Although not a bad idea to provide them, eyewash and shower units are not required when employee exposure is to strong irritants or flying debris.

“Suitable facilities…”
What is suitable? Water for eyewashes must be potable, the temperature tepid (between 60 and 100 degrees Fahrenheit) and provided at a minimum of .4 gallons per minute (20 GPM for showers) for at least fifteen minutes. If located outdoors, it may be necessary, depending on the climate, to heat trace or insulate pipes or take other precaution to prevent water from getting too hot or cold.

It must be assumed that an employee may get a corrosive material in both eyes. For that reason, the device must be capable of flushing both eyes simultaneously. The worker will need to hold the eyelids open to allow flushing agent to get deep within the eye in order to remove the corrosive material; therefore, the unit must have hands-free operation allowing the worker to use the hands to hold the eyelids open. All this would rule out squeeze bottles, drench hoses and hand-held eyewashes. Squeeze bottles may be used by a worker to provide flushing on the way to an eyewash, but may not be used as a substitute.

And because the worker could have the corrosive material not only in the eyes but also running down the back, the shower should be positioned above the eyewash allowing the user to take advantage of both simultaneously.

The height is also important. An eyewash should be installed no less than 33 inches above the floor and no higher than 53 inches. Showers must be between 82 and 96 inches high.

“For quick drenching or flushing…”
The unit should be easily accessible and designed so it is capable of going from off to on in no more than one second.

“Shall be provided within the work area…”
Many corrosive chemicals will cause tissue damage very quickly and the longer the material remains in the eyes or on the skin the more severe the damage. Eyewash location should be based on the pH level of the chemical. The more acidic the material, the closer the unit should be to the point where exposure may occur. As a general rule, the eyewash and shower should be within 10 seconds travel time (approximately 55 feet) from point of potential exposure but in some cases the travel distance should be less. This is especially true given the fact if an employee needs an eyewash, he/she probably does not have clear vision which may make traveling to the eyewash difficult at best.

The unit should be on the same level as the point of exposure without having to go through doors which can be locked.

“For immediate emergency use.”
As stated, time is of the essence. Also, this statement implies each unit must be inspected; otherwise, there is no assurance the unit will be readily available when needed. Z358.1 states units should be tested weekly. I normally recommend, in training, the potential user take a few seconds each day before beginning the task which could lead to contact, to test the eyewash in his/her work area just be sure it works. How would they know if a supply line was damaged the previous shift and the water had to be shut off until the line can be repaired? In addition to gaining assurance the unit works properly, weekly testing also flushes bacteria and contaminants from the supply line.

Employee Training
Though not stated, if an employee is provided with equipment, steps must be taken to assure the worker understands how to use it. Under Z358.1, employees shall be trained to locate the units, keep the pathway unobstructed and how to use the devices.

Manufacturers’ Recommendation
Some units will require occasional maintenance such as cleaning or replacing filters. Be sure to follow any instructions provided by the manufacturer for your eyewash and shower units.

And Finally…
Z358.1 provides additional information on the installation, maintenance and use of such equipment. It is recommended every employer who has emergency eyewashes and showers, get a copy of the standard. It is also recommended an emergency eyewash/shower program be developed which will bring employers closer to assuring workers always have proper first aid, including flushing of the eyes and body.