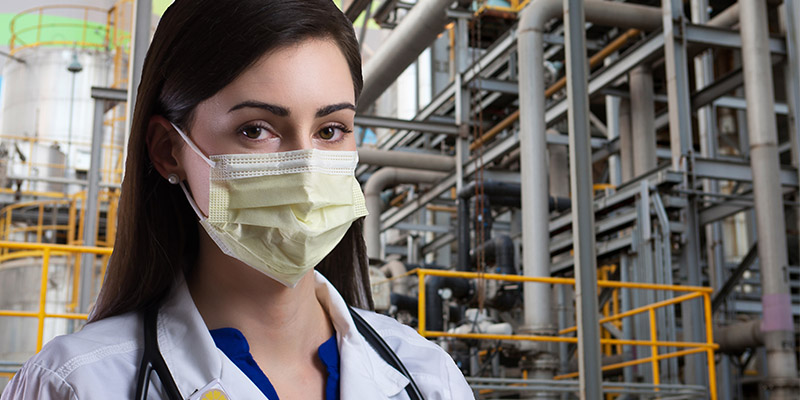 In the early 1970s, OSHA was established by the Federal government to prevent work related injuries, illnesses, and fatalities. Given the comprehensive nature of OSHA compliance and the lack of familiarity by manufacturing company management with worker health and safety compliance, the demand for “in-house” medical and safety professionals grew rapidly. Between the mid-1970s and mid-1980s, the percentage of industrial operations with 250+ manufacturing employees, who had “in-house” occupational health nurse (OHN) support to assist with OSHA compliance initiatives, was high. This support included services such as hearing conservation, respiratory protection, injury and illness recordkeeping, first-aid administration, emergency medical care and employee wellness programs as well as training in the areas of occupational health, including First Aid CPR/AED and, most recently, bloodborne pathogen control. Manufacturers also discovered that an “in-house” OHN could significantly decrease lost time accidents, especially those that were formerly categorized improperly when injured employees were sent to an outside medical clinic for evaluation.

The ABOHN keeps records on the number of RNs who sit for the exam each year. As expected, the first year the test was administered in 1974, only 92 RNs nationwide took the ABOHN certification exam. RNs pursuing certification climbed slowly to 157 by 1980. However, during the 1980s, the COHN credential became more important to larger manufacturing companies and peaked at 371 in 1989. During the 1990s, the demand for “in-house” COHNs skyrocketed, with the average number of RNs per decade sitting for the exam rising from 260 per year during the 1980s to 680 per year in the 1990s, with a historical record high of 1,260 RNs in 1995!

During the late 1990s and early 2000s, corporations began to “engineer out” physical and chemical stressors in the workplace to avoid the liability and administrative complexity of complying with OSHA Standards, specifically those which impacted occupational health. Hazardous materials in manufacturing processes were gradually eliminated and substituted with safer alternatives. Engineering workplace controls were introduced to reduce and/or eliminate noise and more effectively remove airborne contaminants. Robotics in process lines also emerged, removing many tasks which were hazardous to manufacturing employees. Industrial safety also made significant strides, with the OSHA incident rate for accidents generally improving across most industrial classifications. The move of more heavy industry during this period from the US to other countries in Asia and Central and South America also decreased the demand for “in-house” OHNs. By the late 1990s, OSHA accident statistics clearly revealed that most workplace accidents were related to ergonomic stresses, which prompted OSHA to release an Ergonomic Standard. When the Bush Administration repealed the Ergonomic Standard in 2003, much of the emphasis on proactive worker health initiatives began to wane (although OSHA still recognizes ergonomics as the primary driver of Recordable Accidents and continues to use the “general duty clause” to cite ergonomics as a cause for accidents).

As social distancing guidelines are relaxed and manufacturing operations cautiously ramp-up to full capacity, the re-emergence of the OHN as a full-time resource in industrial settings will become a cost-effective measure to minimize the potential for pathogen transmission in the work environment. Experienced OHNs can coordinate COVID-19 screening programs, help promote social distancing initiatives, conduct tracing for employees identified with COVID-19, perform respirator fit testing/coordinate medical clearance for respirator users, train employees on proper PPE use and universal precautions for infectious disease transmission and serve as an liaison between local public health departments and industry. In addition to being the central resource for pathogen awareness and transmission prevention in the workplace, an OHN can support traditional areas of OSHA compliance. including accident recordkeeping, treatment of occupational injuries/illnesses accident treatment, workers compensation case management and provide training in First Aid/CPR/AED.

How Can We Help?
In addition to The EI Group’s occupational health and industrial hygiene services focused on preventing the spread of COVID-19 and other pathogens in the workplace, we have been placing experienced contract OHNs in the industrial and institutional workplace for over 25 years. If you would like to learn more about our contract OHN Program as well as the routine technical support EI Group’s staff of “in-house” occupational health nurses, physicians, paramedics, industrial hygienists and safety professionals can provide to our contract OHN staff, please contact us today at (800) 717-3472. The lessons learned over the past several months aimed at prevention of occupational COVID-19 transmission, combined with our conventional occupational health, safety, industrial hygiene and environmental engineering expertise, are a valuable asset as business and building owners prepare to return to “normal” and get back to work. Contact us today at (800) 717-3472 or ei@ei1.com.