Twas the Night of Confined Spaces 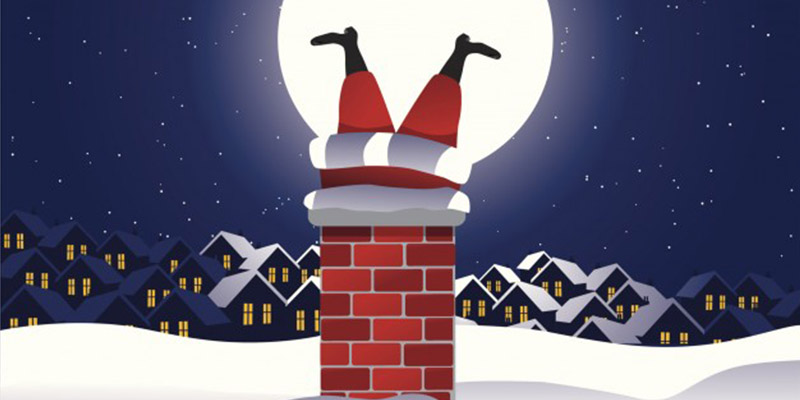 Twas the night before the largest (and only) product distribution event of the year and the facility, in the coldest climate on Earth, was abuzz with bustle and frenzied activity.   Employees of shall we say “a smaller stature,” were busy transporting  parcels, both large and small, from infinite rows of shelving to the plant’s loading docks and onto an awaiting magical sled via forklifts.   Of course, all of these smaller stature employees were over 18 years of age in accordance with OSHA’s 29 CFR 1910.178 standard for Powered Industrial Trucks.  Great care was taken not to drop this valuable cargo and the forklift’s lights, sound and peppermint aroma alerted nearby pedestrians in the area when rounding corners.

Once the heaping mountain of packages was securely fastened upon the sled, the facility’s Director of Distribution and his wife, who serves as EHS Manager and Head Baker, came out into the frigid Arctic air for a pre-flight safety inspection.   They reached into the sled’s glove box for a copy of OSHA’s 29 CFR 1926.601 standard regarding Motor Vehicle Safety.  Headlights and brake lights…check.   Reverse signal alarm…check.  Powered windshield wipers for visibility….check.  The last step prior to take-off was the matter of fuel.  As part of the company’s sustainability program, gasoline and horsepower have been replaced by magical dust and reindeer power.  Unorthodox? Sure.  However, a safe journey is all that matters.

It’s this journey that will have the company’s head honcho literally traversing the globe….from Headquarters in the Northern-most point of the world to the tundra of Antarctica where a handful of geological scientists have been particularly good this year.  He will no doubt be subject to extreme thermal stress hazards, which are covered under OSHA’s General Duty Clause (a different kind of Claus).  Risks associated with both heat and cold stress are dependent upon several factors including air temperature, relative humidity, air/wind speed, clothing and worker acclimatization to the environment.  A fluffy white beard probably helps as well.

Although equipped with all of the appropriate clothing and safeguards against the varying degrees of temperature, the hazards are far from over.  The Director of Distribution must also contend with avoiding power lines while in flight (Electrical Safety – OSHA 29 CFR 1910.333 Table S-5), harnessing himself while on roofs (Fall Protection – OSHA 29 CFR 1910.140) and then of course there is the matter of navigating rather tight chimneys (Confined Space – OSHA 29 CFR 1910.146).  Granted, most chimneys likely are never entered, therefore probably do not possess proper safety signage.  Still, caution must apply.  Our hero to the young (and young at heart) has appointed one of his trusty reindeer to serve as “Entry Supervisor and Attendant” and notified all local fire departments ahead of time in case of an emergency evacuation. Provided he travels safely down all chimneys, let’s hope the tenants have not left a smoldering fire or else he will have to consult his pocket OSHA Manual to look up standard 29 CFR 1910.38.

The last hazard of the evening is one that affects his waistline in the form of sugar cookies, but I don’t believe that is covered under OSHA. As he lifts his sled from the final stop, he bellows into the cold night air “Merry Christmas to All and To All A Safe Night!”